We will have a look at what is Litecoin (LTC) and how does it works and also what is the difference between Bitcoin and Litecoin. LTC is an open-source, decentralized, and permissionless digital currency allowing users to send transactions around the globe without the involvement of 3rd parties. Litecoin was released on GitHub on October 7, 2011, and went live on October 13 same year. There are 84 million Litecoinс will ever exist. During the years, Litecoin has been consistently in the top 10 cryptocurrencies by market capitalization, which shows that it is a substantial project. Below we see what is Litecoin and why is a great decentralized cryptocurrency

Litecoin, similar to Bitcoin, is a decentralized distributed ledger called Blockchain with slightly different characteristics. LTC code is a fork of the BTC client with a different Proof of Work algorithm called script. All Litecoin transactions are recorded on the Blockchain from the first to the last one. All transactions are included in blocks that are created from the miners (hardware machines producing hashing power) and validated by the nodes which are distributed on thousands of computers around the world and communicate with each other to prevent dishonest actors from hurting the network.

When the new block (new block is generated every 4 minutes) gets created, the miners are rewarded with coins called the block reward. Basically, every new block makes new coins that are added to the Blockchain, and on every 840 000 blocks, this block reward getting cut half (called Litecoin halving). When Litecoin was released back in 2011, the reward was 50 coins. Four years later it has become 25, until now when the award is 12,5.

To understand better what is Litecoin, let’s have a look behind the blockchain and see where the decentralization coming from.

Cryptocurrency mining involves two functions: adding transactions to a blockchain and releasing a new cryptocurrency. The blocks added by the miners must be done by the so-called Proof-of-Work (PoW). The PoW consensus algorithm ensures that miners
can validate a new block, include the transactions, and add it to the blockchain ledger. That is happening when the distributed nodes reach a consensus and agree that the block hash provided by the miner is a valid proof of operation.  Mining needs powerful computers and a particular program that helps miners compete with their counterparts to solve complex mathematical problems.

Litecoin, different from Bitcoin, uses the Scrypt mining algorithm. The difference is the Scrypt algorithm is memory intensive. It is also energy efficient, which allows the creation of more hashing power and less electricity to be used.   People who are using their computing power to secure blockchain and cryptocurrency networks are called miners. A new cryptocurrency is created in parallel with solving these mathematical problems. The process is similar to the mining of physical gold in mines. Besides, the work and the luck required by the computer to accomplish some of these tasks are equivalent to a miner finding gold in the earth, but while digging in a sandbox.

What is the difference between Bitcoin and Litecoin?

The main advantage of Litecoin is the improvement of scalability over Bitcoin without sacrificing security and decentralization. The coin was created as a complement to Bitcoin and to be used for smaller transactions because of the lower fees and faster confirmations. Litecoin could handle 54 transactions per second on-chain, which is eight times more than BTC, and it costs 1/1000 of a Litecoin to process a transaction.   Over the years development on Litecoin proved to be much faster than Bitcoin with the implementation of segwit, first atomic swap with Decreed cryptocurrency, and plans for adding MimbleWimble via extension blocks which will improve the privacy of the coin

Litecoin has one of the fastest-growing communities in the cryptocurrency space with regular meetups around the world. Also, as a decentralized currency has the same properties as Bitcoin: Open, Borderless, Neutral, Censorship resistance, and Public. Litecoin is the most accepted coin from the merchants after BTC and is listed on almost any exchange.  The Blockchain is the second old running 24/7 with zero downtime. Litecoin dominates the script algorithm (around 98%), so the network is very secure.  Most important is that Litecoin is always going to be faster and cheaper to use than Bitcoin and because it is a fork of BTC could implement any new future with almost no effort. 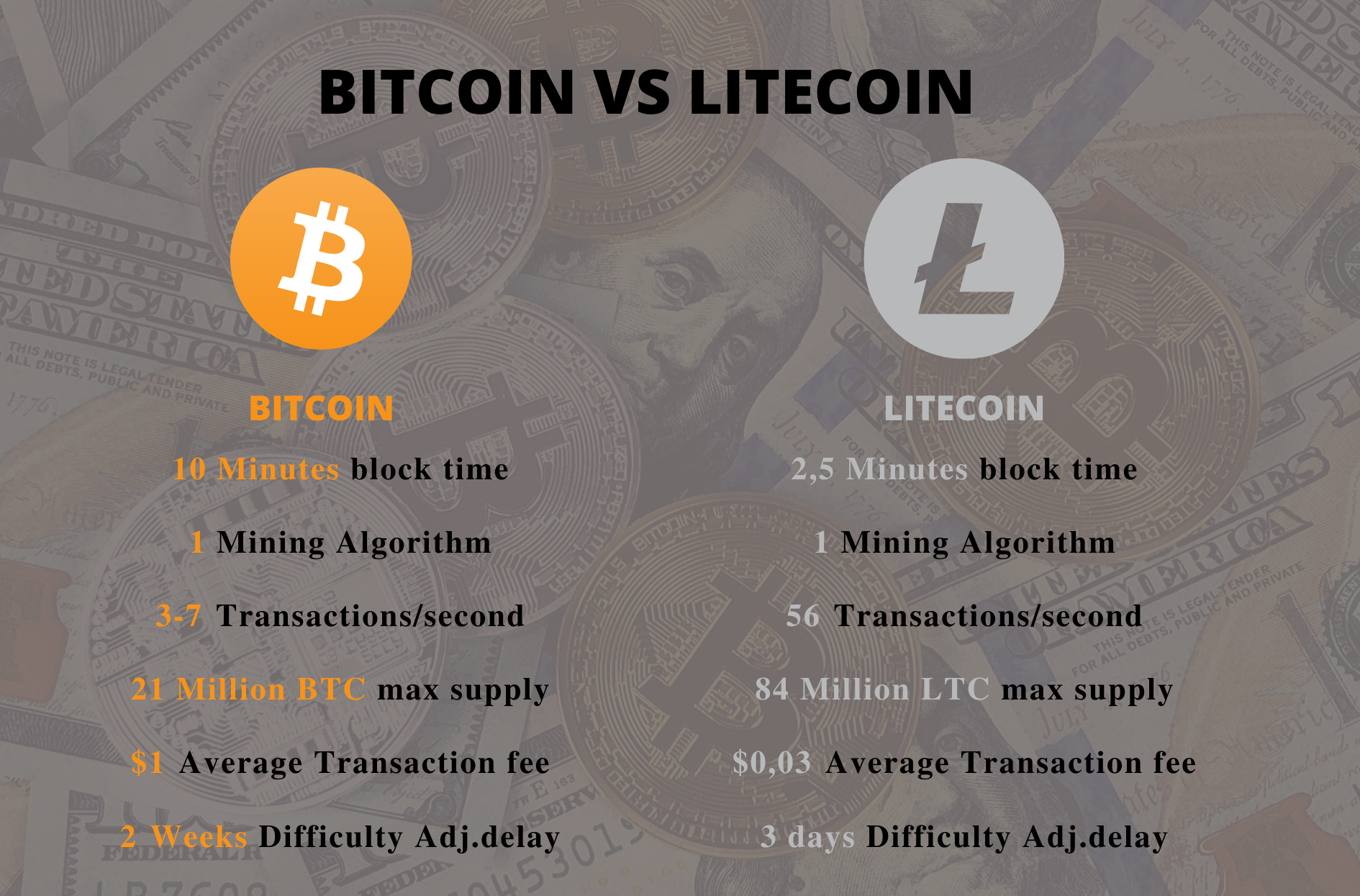 How to buy Litecoin?

There are many ways you could buy Litecoin. You could do that from cryptocurrency exchanges where you could purchase Litecoin with credit or debit cards, and the fees are acceptable.  Another popular option is Bitcoin ATMs, where you could buy LTC with cash where the costs are higher, but if you are valuing your privacy, probably this is the way to go. Check our article on how to buy Bitcoin for more information.

How to store Litecoin?

There are two ways to store your Litecoin. Either you could leave it on an exchange, which is centralized, or you could store it in cryptocurrency wallets. Litecoin is the 3rd cryptocurrency after Etherium and Bitcoin in terms of liquidity, so there are plenty of options. Every major cryptocurrency exchange supports Litecoin as well most of the wallets.

Cryptocurrency exchanges are places where you could buy, trade, and keep your Bitcoin. Often these exchanges operate as a bank and storing your BTC, but this is still not a very secure way of storage. Over the years, many exchanges got hacked, and many people lost their coins. However, things are getting better with the regulation we see in some jurisdictions.

Mobile wallets are mobile applications where you could store your Litecoin. That is a more secure way to store your coins than on an exchange. That is because you are holding the private keys, and even if you lose your phone, it can be restored later.  Mobile wallets are not very safe because of the internet connection, but they are perfect for keeping a small amount in them for small purchases like buying food, coffee, etc.

Hardware wallets are devices specially designed to store private keys, and this is probably the best way for most people to save their Litecoin long term. The private key itself is stored in the secure part of the device, so even connected to a malware-infected computer, and your money is safe. You can read more about some of the most reliable and popular hardware wallets here.

Paper wallets are still an excellent option for securing cryptocurrency. Especially for people on a budget who don’t want to spend money on hardware wallets. Liteaddresss.org is a great open-source tool that will create private and public keys for you. If you want more information check our article cryptocurrency wallets.

As we mentioned above, Litecoin is the second oldest cryptocurrency after Bitcoin. The Blockchain has a zero downtime since its creation in 2011. Litecoin was the first significant cryptocurrency to activate segregated witness in May 2017 a few months before Bitcoin. The same month the first transaction from Zurich to San Francisco via lightning network channel was completed. Currently, the Grin developer David Burkett is working on an implementation of MimbleWimble over Litecoin. That should be done via extension blocks to increase the fungibility of Litecoin. This will be a colossal accomplishment when implemented because of Bitcoin and Litecoin lack of privacy. Because of that, every single transaction could be traced. The great thing is that privacy will be an optional future, and the user will have a choice on how to do the operation.

Last but not least, Litecoin has a massive community around the world and is the most accepted cryptocurrency after Bitcoin from merchants. In our opinion, Litecoin is a well-established cryptocurrency and will always be cheaper and faster to transact than Bitcoin. That is what makes Litecoin a unique alternative currency.