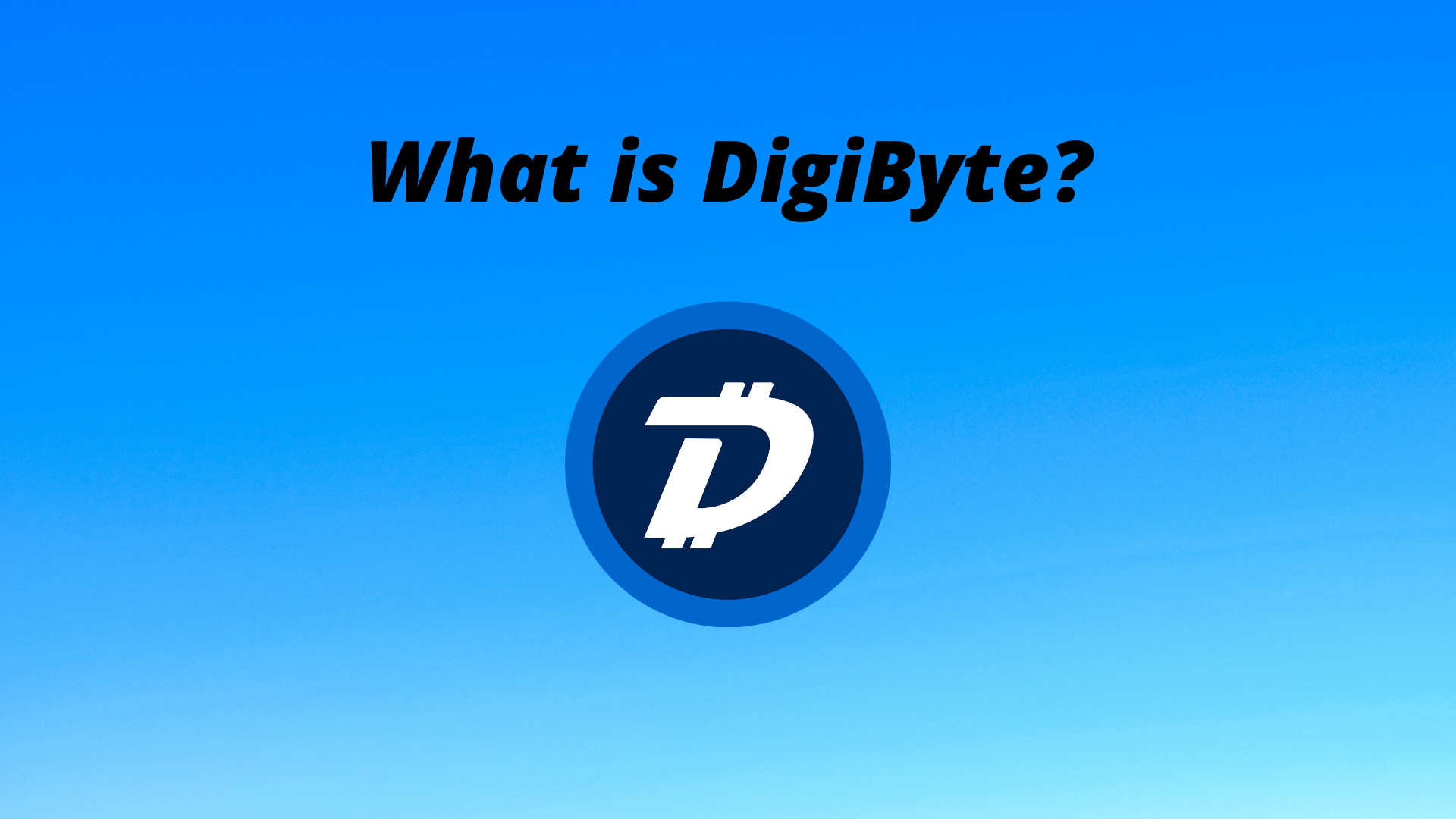 What is Digibyte Cryptocurrency?

Digibyte (DGB) is a cryptocurrency focused on security and decentralization. Digibyte is the longest and the most secured UTXO blockchain. There are 21 billion DGB that will ever be created, and the last mined one will be in the year 2035. Below we will look at what makes DGB blockchain unique.

Digibite is a fork of the Litecoin code and is launched on 10th January 2014 by Jared Tate. Similar to other UTXO blockchains, DGB is a minable Proof of Work coin using five different mining algorithms. Digibyte blockchain is a distributed ledger that holds the record of all transactions from the first to the last block. All transactions are included in blocks that are created from miners and validated by the nodes in the network. Blocks are produced every 15 seconds, and the mining reward is reduced by 1% each month. The coin could currently handle 1066 transactions per second and will increase to 280000 TPS (transactions per second) by the year 2035. That is done by doubling the block size every two years.  Different from most other coins like Bitcoin and Litecoin, for example, Digibyte blockchain uses five separate mining algorithms, so you don’t need special ASIC  mining equipment to mine it if you want to. That makes mining much more decentralized and secure. 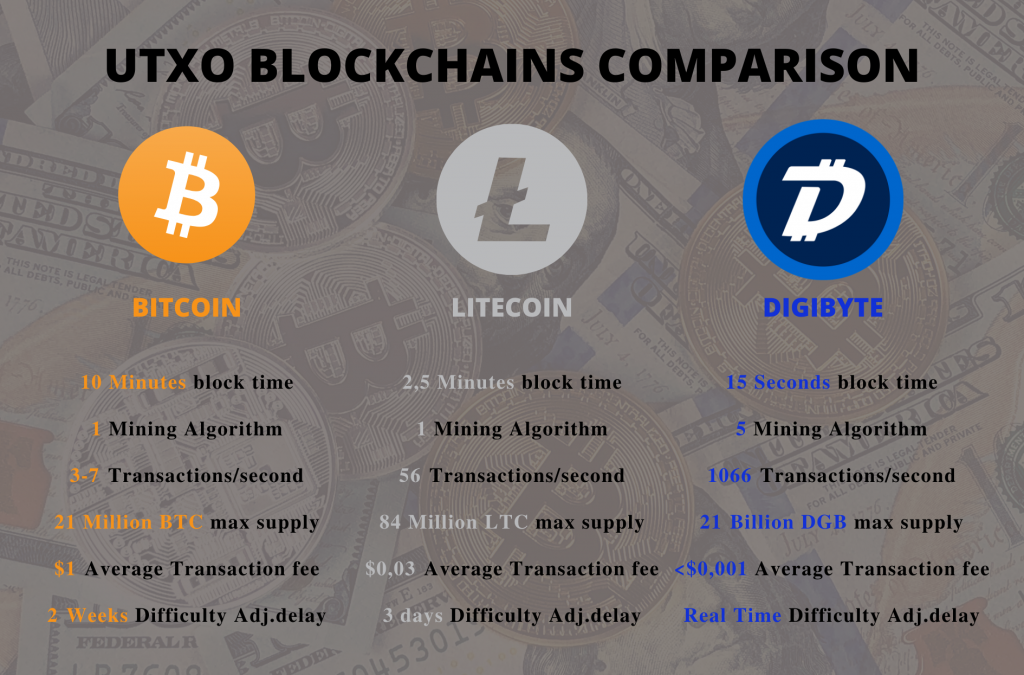 Why is Digibyte the most secure UTXO blockchain?

Digishield is created to retarget the coin difficulty every block, which prevents large miners or mining pools from mining coins when the difficulty is low with their hashing power because this increases the mining difficulty after few blocks. Later, when these large miners or pools stop mining DGB with their hashing power, the difficulty for the small miners is still very high, and they will not be able to create a new block, and the chain could freeze for hours before difficulty readjust. Since its creation, many other blockchains like Dogecoin, Bitcoin Cash, and Zcash implemented Digishield.

Multishield is an updated version of Digishield to work with all five algorithms. By implementation of Dgidhield to attack, Digibyte cryptocurrency is almost impossible as the attacker will need to control 99% hashing power of one hashing algorithms and 44% of the other four. If someone tries to attack, DGB will need to double the hashing power every few blocks on every algorithm. Even If you throw all the Bitcoin(SHA-256) hash power and Litecoin (SCRYPT) hash power to attack Digibyte blockchain, you will fail.

Ever block shares 20% per algorithm and have five separate difficulties (1 for each algorithm).

Applications on the top of Digibyte

Because of the security and scalability of Digibyte cryptocurrency and the way it is constructed, there is room for different DAPs to be built on the blockchain.

Digi ID app is a way where you can sign to an application or website using the security of the blockchain. It is done by using a blockchain signature (similar to signing a transaction with the private key). Basically, Digi-ID uses the signature of your private key to sign in to different websites and applications online with a QR code. QR code is basically an address generated by the public key with a hash function.

The only thing you expose that way is the one-time signature. With every other login, Digi ID generates a new signature. Even if the hacker is able to have the one-time signature he is not able to guess your private key because the public key is generated on ECDSA (Elliptic Curve Digital Signature Algorithm). Digi-ID is entirely anonymous, and no data or personal information is stored. Mobile cryptocurrency wallet Coinomi was the to implement Digi-ID.

Digiassets is a decentralized protocol build on the top of DGB, allowing issuance of digital assets, tokens, etc. The creation of such an asset is straightforward and could be generated from a mobile or desktop wallet within seconds. Manipulation is not possible due decentralized nature of the blockchain and why this is useful for issuing anything from concert tickets to the company’s shares. Every asset is unique, can’t be replicated.

V-ID is a Dutch-based company aiming to prevent digital fraud by using DGB blockchain. Basically, their goal is to put notarization on a blockchain. The validation process is done by extracting and uploading on the blockchain the fingerprint of the files. If later a file gets changed with just one pixel or anything else, V-ID will detect the manipulation.  V-ID can protect from manipulation, not only digital data but physical ones as well.

How to buy and trade Digibyte?

Like most of the other cryptocurrencies, the easiest way to buy is from crypto exchanges, but our personal choice is the ABRA app, where you could use a debit and credit card. Abra app allows you to own your private keys and hold or trade DGB against some other major crypto and FIAT currencies.

If you want more options and trade Digibyte against most of the cryptocurrencies, the two exchanges with a long term reputation are Bittrex.com and coingate.io. Anyway, you need to be careful when using centralized exchanges because you don’t own your private keys.

How to mine Digibyte?

There are few ways to mine Digibyte cryptocurrency. As we mentioned above, there are five mining algorithms:

You will need a unique ASIC miner to mine Digibyte through SHA-256, but the advantage of that is also you could mine Bitcoin with the same miner.

Again here you will need an ASIC miner but for the SCRYPT mining algorithm, which is also compatible with Litecoin.

SKEIN is another algorithm you could mine Digibyte, so the best way to try it with GPU ( Graphics Processing Unit) graphic card. The best cards for mining DGB with this algorithm are Nvidia.

To mine DigiByte with Qubit algorithm, you will need an ASIC miner, but there are no other good projects to mine with this miner in case DGB stops being profitable for mining so you will be left with the useless hardware equipment.

Odocrypt is the newest mining algorithm that replaced the Groestl algorithm in 2019. The best thing about Odocrypt is designed to change itself every ten days, so creating ASIC for this algorithm is not quite possible.  To mine DGB with Odocrypt, you will need an FPGA (field-programmable gate array).

Digibite is one of the leading cryptocurrencies and could store it on various mobile, desktop, or hardware wallets. If you want to understand what is the difference and what will suit you better, check our article cryptocurrency wallets. Also, you could trade DGB with other currencies on various cryptocurrency exchanges. The ones we recommend are Bittrex, Bitfinex, and OKEx.

Digibite blockchain is one of our favorites cryptocurrencies for many reasons. It has a great community with many talented developers around the world. The structure of the blockchain allows the building of applications without congesting the network. That is why we think this is going to be one of the major decentralized blockchains in the future.