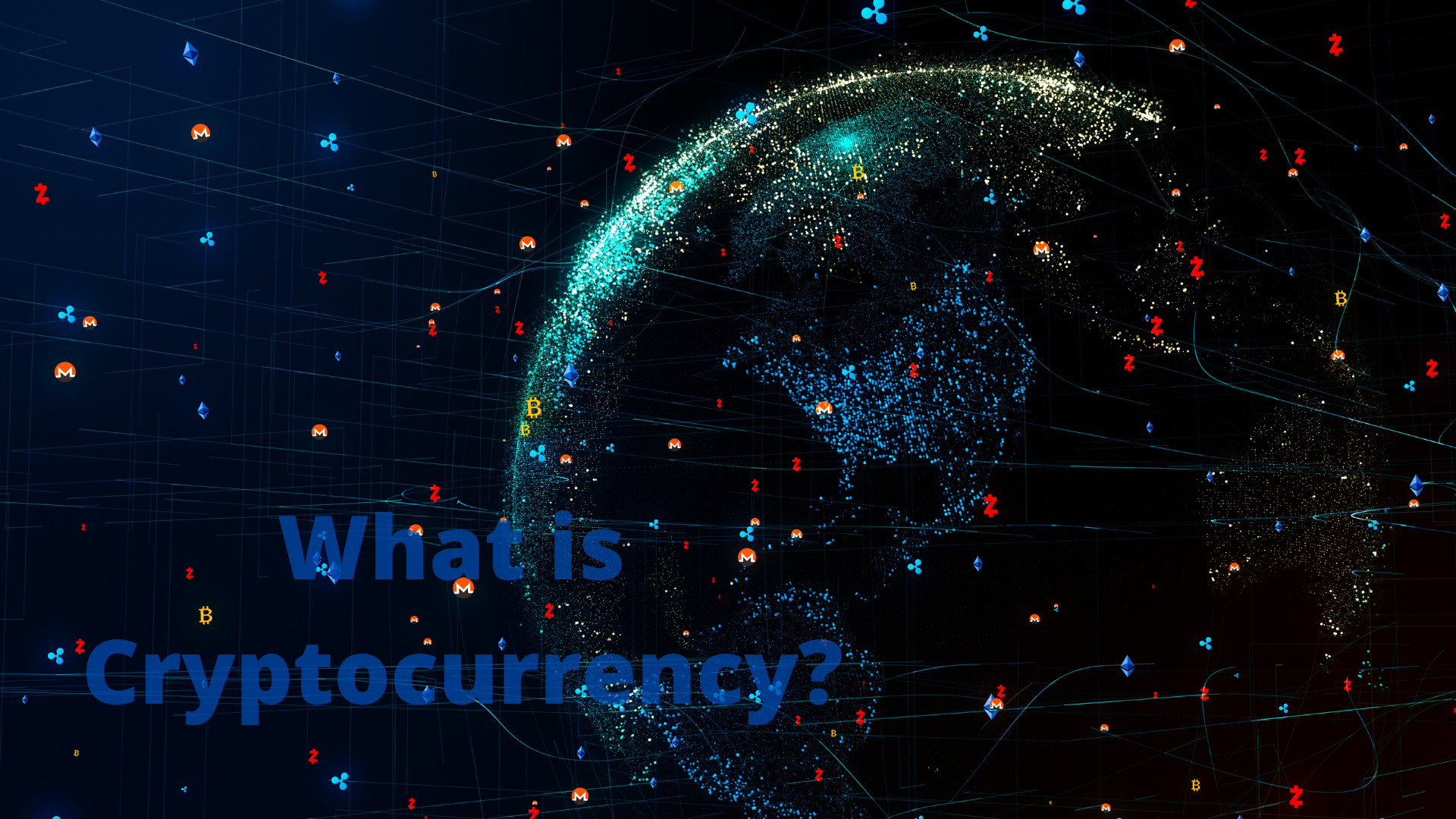 Recently, cryptocurrencies and the blockchain technologies behind them are gaining popularity in the digital world and are conquering more and more industries, similar to the global phenomenon. That is why in this article, we want to answer the question, What is cryptocurrency?

Cryptocurrency is a digital asset. It is distributed through a network of a large number of computers (nodes) around the world. In other words, cryptocurrency is virtual or digital money in the form of „tokens“ or „coins.“
The term „crypto“ comes from the encryption techniques used to protect the network, which means that the currency is backed by cryptography.  That makes it almost impossible to counterfeit it or spend it twice.
Cryptocurrencies, by their nature, allow online payments, denominated as virtual „tokens.“  They are protected by the nodes and miners and are also represented by internal ledger records of so-called blocks in the system.

How Do Cryptocurrencies Work?

As virtual money, cryptocurrencies can be sent directly between two parties using private and public keys. These transfers can be made almost instantaneously, with minimal processing fees, which allows consumers to avoid the high charges imposed by traditional financial institutions.
The transfer is recognized almost immediately by the entire network. But it does take some time to confirm it. For a transaction to get approved by the system, it needs a few steps.

The first one is the creation of a block where the transactions are included. That is done by powerful computers ( Miners) competing to solve a mathematical puzzle by producing hashes to create the block. By doing so, the miners are rewarded with newly minted coins.  They also get transaction fees paid by the sender of the transaction. When the block is created, it is distributed to all nodes (a software program contains every transaction of the blockchain), and when the nodes verify the block as valid, it is added to the blockchain. When the block is created, it contains information about the included transactions. The block also has a unique hash ( unique identifier) and contains a hash from the previous block. A congaing hash of the last block is what makes them connected and how the term blockchain occurs. That is what contributes to the attractiveness and functionality of cryptocurrencies. Blockchain technology is used to maintain an online ledger on all transactions that have ever taken place. You can learn more about blockchain here. 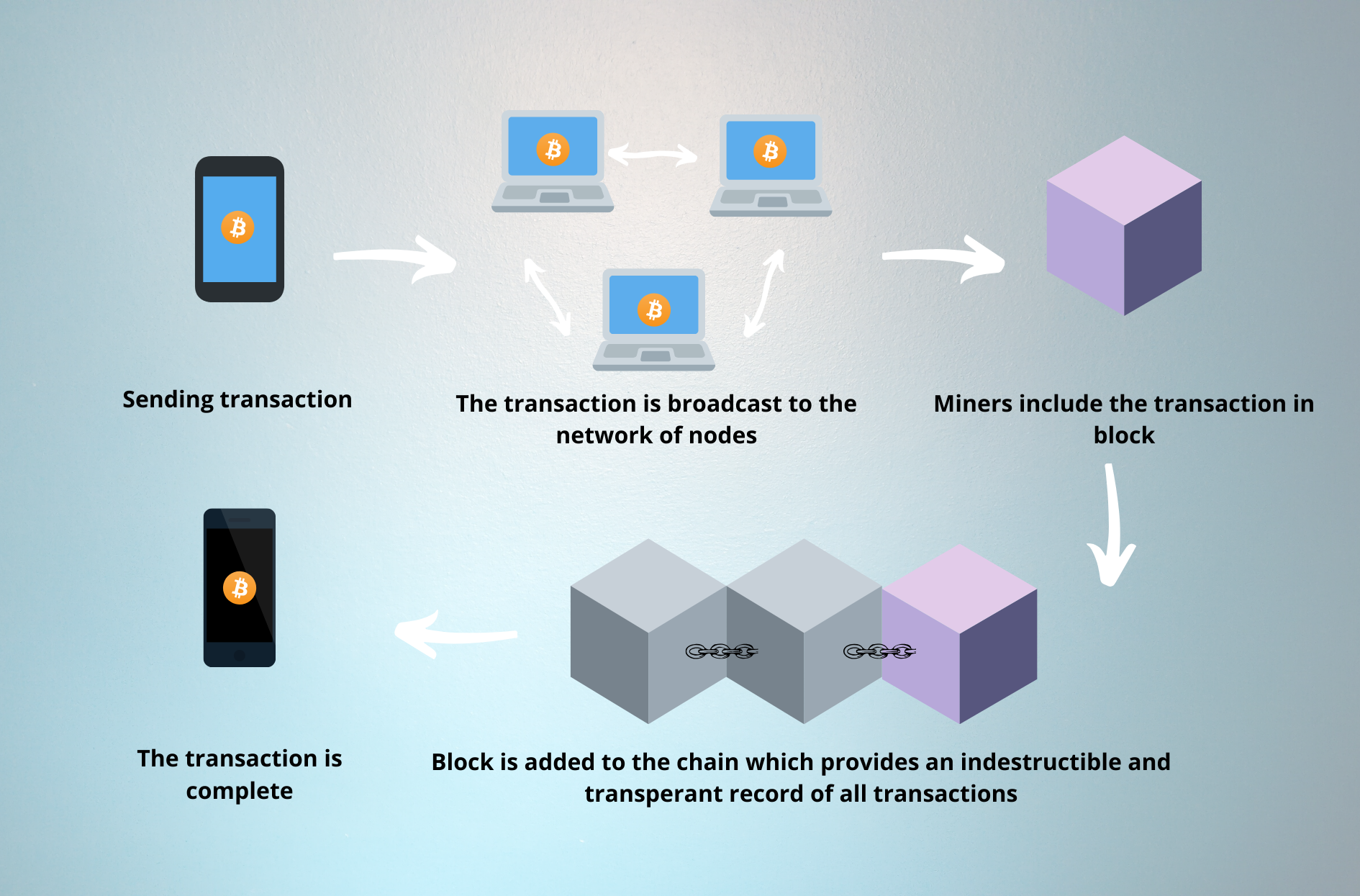 What we’ve said cryptocurrency mining is the process by which transactions between users are confirmed and added to the blockchain’s public ledger. However, the mining process is also responsible for creating new coins in the existing circulation supply system. That is actually one of the key elements that allow cryptocurrencies to operate as a decentralized peer-to-peer system without the need for any central authority to intervene as a third party (as in the world of traditional money markets).

And now, let’s look at the mechanism that manages cryptocurrency databases. Cryptocurrencies like Bitcoin consist of networks with peers. Each peer (node) has a record of the complete history of all transactions and the balance of each account participating in the system. And every miner who is responsible for creating blocks receives a reward. There are two types of consensus algorithms, and while some cryptocurrencies like Bitcoin, Litecoin, Monero use the POW (Proof of Work) algorithm, other coins like Tezos, Neo uses POS (Proof of Stake) consensus algorithm.
Much can be said about miners’ activity, but since this is the most important part of the cryptocurrency system, we wrote a unique article about it. You can read it here.

In order to understand what a cryptocurrency is, we need to have a look at consensus algorithms. Proof of Work is a consensus algorithm where you need a piece of specialized hardware equipment producing hashes to solve a math problem in order to ad-block to the blockchain and secure the network as well. By doing so, the miners who create a block are rewarded with cryptocurrency. There are different POW mining algorithms, and in the case with bitcoin is called SHA-256, where you need specialized mining equipment called ASICs miners if you want and join the competition. There are different mining algorithms used by other blockchains as some of them could be mined with CPUs in the case of Monero, and anyone could quickly join the network to start mining and get rewarded with coins.

POS is the other most popular consensus algorithm. Here apart from miners, we have got validators who are creating every new block. That is happening by choosing a random node of the blockchain to validate the blocks. The idea of POS consensus is that it will not be going to use that much electricity as the POW. If you want to be part and validator in this concept, you should lock a certain amount of coins to do so. This is necessary because if the validator approves fraudulent transactions will be penalized with some of the staked coins. When the block is created, the validator is getting the block reward (newly minted coins). That is done after a period of time when the network is sure that the block is not fraudulent.

Advantages and Disadvantages of Cryptocurrencies

Like any new technology, digital money has its advantages and disadvantages. Let’s start with the positives first. One of the main benefits of virtual cash is security. Unlike traditional payments, such as cash and credit cards, cryptocurrencies are digital and encrypted. What does this mean? You cannot be deceived about any transaction as it can with standard payment systems. Thanks to the encryption technique, it is also much harder to steal a digital coin than a wallet of cash. Also, the entire cryptocurrency system is designed for fast, no-fees transactions. So undoubtedly, these digital currencies will become more popular as more people have access to mobile devices.

Another great advantage of using cryptocurrency instead of traditional cash, especially when buying real estate or a car, is that a digital coin can help eliminate the typical „intermediary.“ Such as brokers, lawyers, and others who inevitably increase the cost of already expensive transactions.
Unlike most fiat money, you can use cryptocurrency anywhere in the world without paying exchange fees. Also, you are the only person who controls your money because the only way you can access your money is through your private key – essentially a cryptographic password that only you know.

Of course, there are some negatives, but we do not doubt that they will improve over time. Such as volatility. Currently, the values ​​of most cryptocurrencies are volatile – they change frequently and sometimes with full margins. That fuels speculative activity on the crypto market, meaning that some people made a lot of money. So when the price of some cryptocurrencies had gone up, while others lost just as much when the price dropped.
On the other side, the transparent nature of cryptocurrency transactions makes them easy to be tracked by everyone, and most of them can’t be used for everything. If you are doing an online merchant business, you don’t want everyone to know to whom you sell. You don’t want your competitors to know from where you are getting the items.

Also, since cryptocurrency is a digital asset with purchasing power, its services will need top-notch security to avoid hacking. But note that the problem here is not so much to the cryptocurrency itself. But rather the third-party companies such as online wallets and cryptocurrency exchanges services.

Who are The Most Important Cryptocurrencies?

The currencies modeled after Bitcoin are collectively referred to as Altcoins. They have always tried to present themselves as modified or upgraded versions of Bitcoin. As of this writing, there are over 3600 cryptocurrencies. Many enjoy immense popularity among a specialized community of supporters and investors. The so-called major cryptocurrencies except Bitcoin are Ethereum, Ripple, Litecoin. Other popular ones that have climbed to the top 20 are EOS, Stellar, Monero, Cardano, Tezos, Bitcoin Cash, Tron, NEO, Dash, Cosmos, HEX, and more.
Some of these currencies are easier to mine than Bitcoin but also have some disadvantages, including the higher risk of lower liquidity and acceptance.
Nevertheless, virtual currencies like Ethereum and Ripple are increasingly being used to find different solutions in the corporate world. That is why they are becoming more popular. Other altcoins are only approved for more exclusive and advanced features over Bitcoin.

How Can You Buy Cryptocurrency?

From all of the above mentioned, if you want to get into the cryptocurrency world, you either need to become a miner or buy a digital asset.  You could also trade it on an exchange like any traditional financial instrument on the FX market. If you are considered to invest in cryptocurrencies, it may be best to treat your „investment“ in the same way as any other speculative venture.  With money printing around the world by the central banks, negative interest rates, and inversion of the yield curve, learning about Bitcoin, Litecoin, and some other proven cryptocurrencies may worth the effort.

Because such an investment decision involves more detailed information, we have created a unique topic, „How to Buy Bitcoin.“ See more here.